A 1907 article noted that the steamship Humboldt traveled from Funter Bay to Seattle in September, bringing 85 passengers and 7,875 cases of salmon (this included some cases from Petersburg as well as Funter). 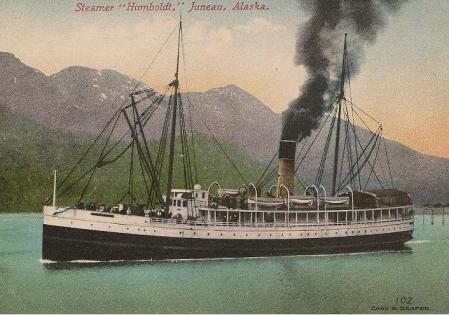 An article in the San Francisco Call of November 18th, 1911, described the Bark J.D. Peters arriving from Funter Bay, where it served as a cannery tender. Unlike the Thlinket Packing Co’s General Fairchild and other old ships converted to barges, the Peters seems to have remained a sailing vessel. It is shown in a 1911 photo with furled sails. Another photo (which also appeared in the Seattle Daily Times dated 1911) shows the ships with sails raised.

The merchant vessel registry describes the Peters as a 182ft sailing bark built in 1875 in Bath, Maine, and operating out of Port Townsend, Washington. It had a crew of 15 and a gross tonnage of 1,085. Registry number was 75809, and call numbers were J.R.L.F. It was owned by the Northwestern Fisheries Co during that time, and probably transported fish from multiple canneries in Alaska. 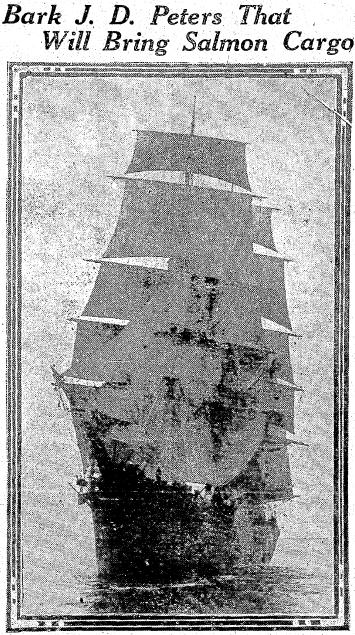 In 1912 it was listed as a schooner, vs a bark. A bark has 3+ masts, all with square sails except the aft-most, and were a common type of slow cargo ships with smaller crews. A schooner has 2+ masts with fore-and-aft sails, even simpler to operate and requiring fewer crew than a bark, but does not necessarily perform as well. The Peters remained on the registry until at least 1928, when it had a crew of 5 and was hauling freight for the Booth Fisheries Co.

Also in 1911, the sailing steamship State of California went aground for four hours at Funter Bay, probably due to a misreading of the tide tables. 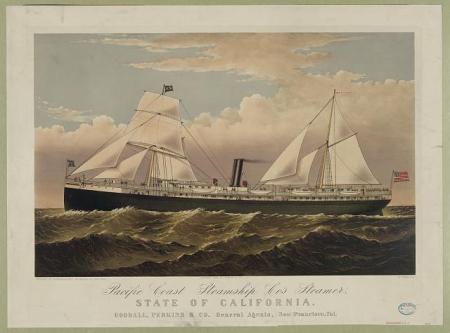 Image courtesy of the Library of Congress. 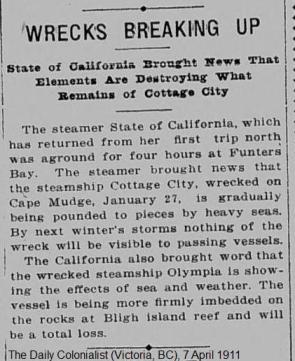 The State of California sank in August 1913 in Gambier Bay, on Southern Admiralty Island, after striking an uncharted rock. More information on the ship is here.

Two photos show a hull on the beach at Funter in 1929 and 1935. The vessel is unidentified, but may be the fishing vessel Pilot. A 1950’s article mentions a “rotting hulk in Funter Bay” in this area, with the registry number 150650. This number was assigned to the Pilot, listed as abandoned in 1925. It was a 50ft long fishing boat from Juneau with a 20hp gas engine and crew of 5, built in Seattle in 1893. It had possibly been a steam tugboat previously. 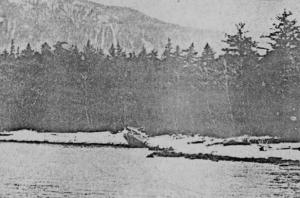 More shipping and vessel information will probably show up in a future post as I dig up more on the subject!

In late 1905, a German-registered tramp steamer named the Mariechen set out from Puget Sound to Vladivostok, Russia. The steamer was owned at the time by Diederichsen, Jebson & Co of Hamburg, and was known for running contraband to Russia and Hong Kong. In 1905 she was reported as planning to run a blockade on the Vladivostok Harbor.

The ship was originally built in 1883 as the Clan Matheson of 3,917 tons. The ship had a history of problems, including fires on board and a prior grounding in the Suez Canal.

Traversing the outside coast of Alaska in December is a risky proposition even today. The ship ran into typical winter storms, then suffered an engine breakdown. Conflicting reports then state that the ship was either adrift for a month, or “beating around near Point Retreat” looking for an anchorage. The ship likely had customs issues which would have dissuaded the crew from seeking a port like Juneau or Skagway. Marine radio technology was fairly new and temperamental, and the ship may not have had a working wireless set. It’s possible the vessel was trying to use sails after the engine died, the first photo shows very tall masts and spars indicating square rigged sails, but some of the spars are missing in the post-wreck photos.

In late January of 1906, the ship finally went aground at False Bay, south of Funter on Chichagof Island. Excerpts from the wreck report note that the compass froze up, the steamer had no charts of the area, and visibility was low due to a snowstorm.

The master of the ship was listed as Captain Rudolph Heldt, with Chief Officer Charles Pruet. The crew was mostly Chinese, who were “rounded up and deported” after the wreck. There were apparently no fatalities, but the cargo was lost. One document blames “local Indians” for the loss of the cargo, but period articles mention many local vessels salvaging “Food, flour, and beer” from the hulk, and selling some of it in nearby towns. An article from December 1906 described a feud over “several loads” of beer looted from the wreck by Robert Reid of Tenakee. Local tough Norman E Smith demanded a cut of the loot, and threatened Reid’s family. Reid then killed Smith with a shotgun at Snyder’s store in Tenakee. 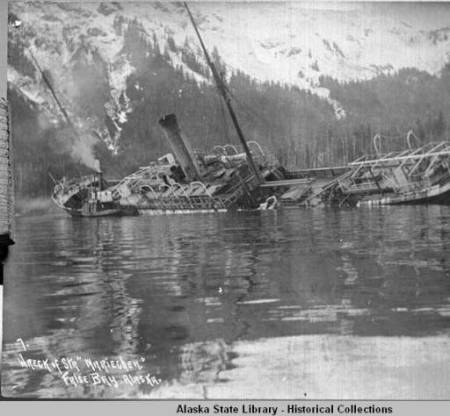 After the wreck, the British Columbia Salvage Co had the contract to refloat the vessel and tow it South for scrapping. The salvage tug Salvor was sent to the area, and the crew used Funter Bay as their base of operations. The tug would periodically stop at the cannery for fresh water and safe anchorage during storms. A March article notes that the water pipes at the Funter Bay cannery were frozen, so the Salvor had to come to Juneau for water. In April of 1906 the Salvor finally got the Mariechen floating, and towed the hulk into Funter Bay. It was further patched at Funter before being towed to Juneau in May, then on to Victoria, BC.

“The German steamer Mariechen is again afloat on the high seas. The steamer Rustler brings word that she was floated and is now at Funter Bay where she will remain until patched up for her tow to Victoria, where a British firm has the contract to repair her.” (from Daily Alaska Dispatch [Juneau] 28 Apr. 1906)

Postcard of hull from beach.

A detailed report of the salvage operation, including a photo of the damaged hull in drydock, is available here.

“Clan Matheson.” The British & Commonwealth Shipping Company; A Record of The Ships And The People That Served Them. Web. <http://www.bandcstaffregister.co.uk/page542.html&gt;.