In the summer of 1905, a party of Congressmen visited Funter Bay on a tour of Southeast Alaska. The group was attending the Lewis and Clark Exposition in Portland, and was invited to visit Alaska courtesy of the Cities of Seattle & Tacoma and the Pacific Coast Steamship Company. A member of the party, Major Alexander McDowell, was photographed with Tlingit basket sellers on the cannery wharf at Funter: 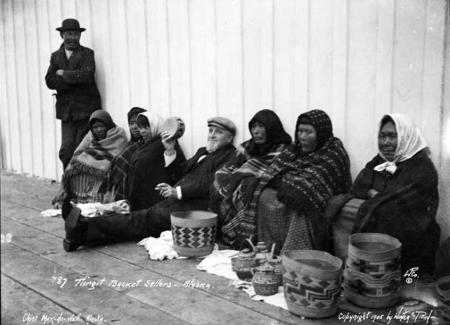 The steamer Cottage City departed Seattle June 5th and brought the Congressmen to Ketchikan, Metlakatla, Juneau, Douglas, Haines, Skagway, Funter, Killisnoo, Sitka, and Wrangell, stopping at Vancouver on the way back. The trip was mainly for pleasure, but the group studied and discussed all sorts of matters, from the representation of Alaska to fishing enforcement and communications. The Washington Post stated that:

“The Congressmen went north with the idea that Alaska’s coast was covered with glaciers and polar bears, but all returned with words of praise, confident of its great future” (“The Tour of the Statesmen in the Far and Golden North”; Washington Post; July 2, 1905)

The article mentions baskets and curios for sale by local Tlingit natives at various ports. I have found a few other references to Tlingit crafts for sale to tourists at Funter (on the cannery wharf), but this is the first time I have identified a photo of such.

“Maj McDowell, Clerk of the House of Representatives, created a great deal of fun for the party, and his photograph with the Indian women at Funter Bay was purchased as a souvenir by every member of the party.”

More information on Major Alexander McDowell can be found here.

Various commentators claimed the visit would bring greater representation to Alaska, and in fact a new at-large congressional district for Alaska was created in 1906.