In my ongoing quest to own and/or sink as many boats as possible, I’ve done something silly with an abandoned canoe. Someone dumped this in the parking lot where I work, and naturally I had to give it a better home.

The entire stern and various other areas were pretty smashed and rotten, so this was a great candidate for a quick and dirty modification. I had an old weedwhacker sitting around, and was able to find a trolling motor prop that fit the weedwhacker with minimal effort. After that it was just a matter of bracing the weak areas, fiberglassing the holes, and painting some awful flames on the side! 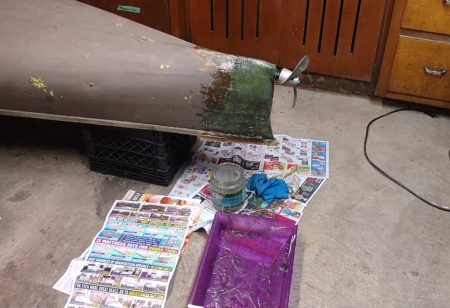 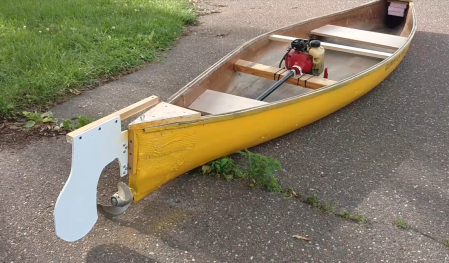 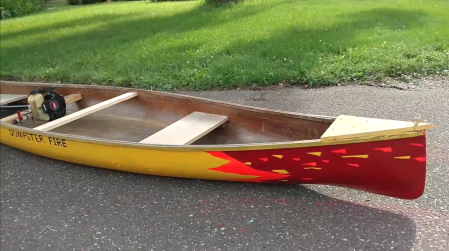 You can see a video of the build process on Youtube here!

I might start putting more of my projects like this on Youtube, hopefully including some with a higher level of craftsmanship! This one was just a quick low-effort way to start. I’ll post an update once this gets out on (and hopefully stays above) the water!

The mini airboat recently suffered a temporary setback, resulting from a high-speed collision on the safety cage.

The plastic safety cage I had built around the engine was pushed into the spinning propeller, which ripped through the hardware cloth and aluminum braces. The propeller itself shattered from the impact.

A word of advice, DONT BREAK YOUR PROP! These things are stupidly expensive. I ended up paying more than twice what the hull cost for a new propeller!

I decided (with some coaxing) that the plastic hoops weren’t strong enough, and that I should go with metal. After acquiring some aluminum tubing of sufficient length to make a suitable-diameter hoop, I was then faced with the problem of bending it. I considered multiple options including hand-bending with sand, heating it, buying a conduit bender, and renting a roller bender, but couldn’t come up with a reasonable-cost way of doing it without kinking. Then I finally stumbled across this wonderful website, which explained how to make bending jigs.

Below is my basic jig, made by tracing out a line of slightly smaller diameter than my desired hoop (because the bent metal wants to spring out larger). I then screwed down blocks aligned with the curve, and bent a piece of flat stock to conform to the arc. The last steps were a stop to hold the tube against the curve, and a cross brace over the blocks to help resist the force on the tube. 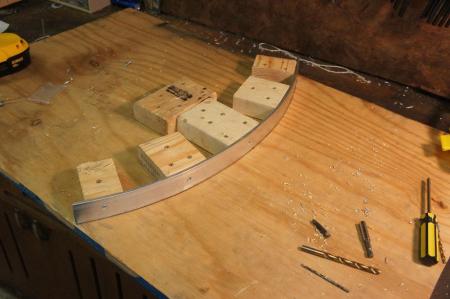 My pipe sections were so long that I could not find space inside the garage to secure the jig AND move around it during the bending process. I solved this by securing the jig vertically to a tree, and pulling the tubing down around the curve a little at a time.

Eventually, I had my aluminum hoops! I made two of the same diameter, for the front and back of the safety cage.

Below are the new hoops sitting next to the airboat, prior to removing the old plastic hoops. As a side note there are 3 other boats visible in this photo, with oars and gas tank for a 4th, two more are off-camera, and I’ve since acquired an 8th small boat (not counting barrel rafts or inflatables). I may have a problem. 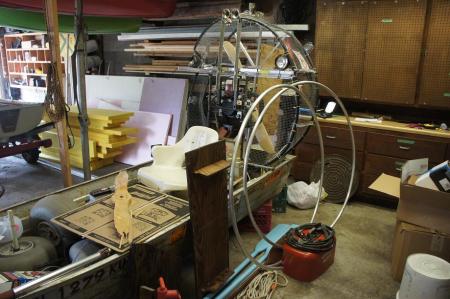 Hiding in the woods near Second Creek is this tiny log cabin, locally known as “Shorty’s Cabin” 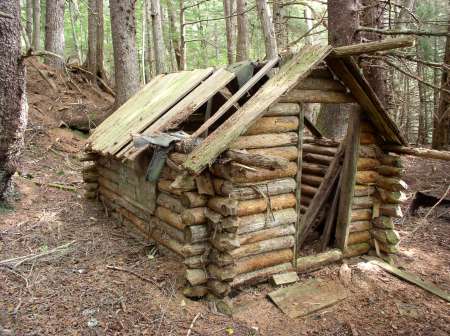 Obviously “Shorty” was a smaller fellow, the cabin is barely 6′ high. It had a single window (now boarded up), a door, a stove, and the remains of a bed. Between the stove and the bed, nearly the entire floor space would have been taken up.

The cabin had a layer of tarpaper over the wooden roof, which helped waterproof it, but tarpaper is easily torn by falling branches or hail, so it would not have been a very permanent solution.  The roof is already half gone.

Window, bedframe (on floor), and tarpaper:

Some more views of the cabin: 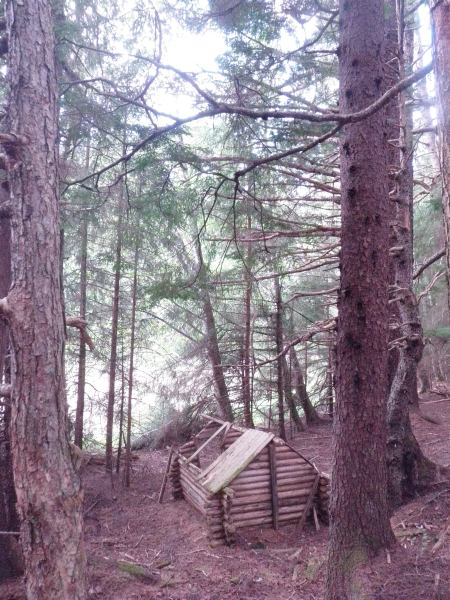 Close-up showing the axe and saw work on the logs:

Closer close-up showing worm trails in the logs where the bark has fallen off:

As the story goes, Shorty was a cook at Hawk Inlet (either the mine or cannery there), got tired of his job, and quit to become a fisherman. He moved to Funter Bay and built the cabin, then began constructing a boat. He was well along in the boat building, when a visitor stopped by and remarked that the boat had no shaft alley (the trough or groove where the tail shaft would run from the engine to the propeller). Shorty gave up in disgust at his shoddy design, jumped on the next mail boat to Juneau, and was never heard from again.

What appears to be part of a boat hull, perhaps Shorty’s failed project:

Other artifacts and debris scattered around include some metal drums, one may have been a barrel stove: 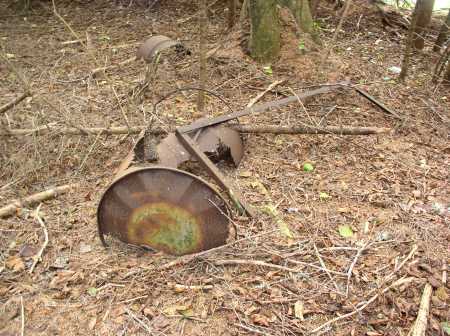 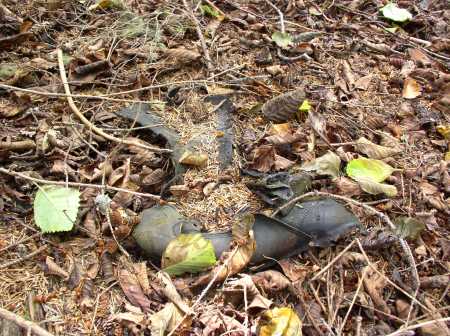 Here’s Dad in front of Shorty’s cabin in the ’70s, when the roof was in better condition!

I am not sure who “Shorty” really was, there were a number of people with that nickname in the area in the early-mid 20th century, including a dairy farmer, a butcher, and a suspected bank robber. So far I’ve been unable to find anything more on the “Shorty” of Funter Bay.

I found a few more photos in the old album scans that are relevant to the topic of boat building. Long-time readers of this site will recall some of my boat projects like the S/V Pagoo, plywood kayaks, and the Craigslist sailboat (update: I sold the small sailboat to the St. Paul Saints as a prop/prize for one of their halftime shows)

Anyway, here are some of my Dad’s boats!

After moving to Alaska in the 1970s, he hand-built a small fishing dory in one of the old cannery sheds. It was powered by an outboard motor and equipped with hand-crank downriggers (gurdies) for hand-trolling. It even had a small “cabin” which was more like a tent.

Here’s the dory under construction:

And launching with the help of some neighbors:

After saving up enough money from dory fishing, he was able to upgrade to a larger power troll vessel, the F/V Venture. This was a converted wood cruiser. 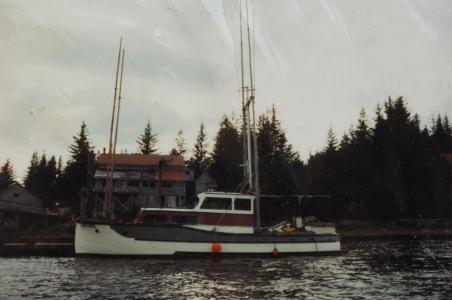 And finally, the 36′ F/V Imperial, which Dad purchased as a fiberglass shell (“Hull, deck, and house”), and finished off in Port Townsend WA before bringing it up to Alaska. 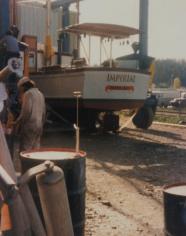 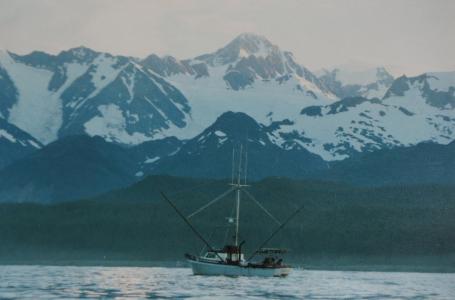 The Imperial was named after Imperial Whiskey, and featured the font on the stern. Someone sent a photo to the company who produced the brand, and they sent Dad a bunch of free stuff. Apparently Imperial Whiskey is now a collector’s item!

For a while, the crew of the Imperial included our family cat, Mandy. I think the story goes that someone had a box of kittens they were giving away in Elfin Cove, and as they got back on the plane for Juneau, they handed my parents the box with the last kitten. 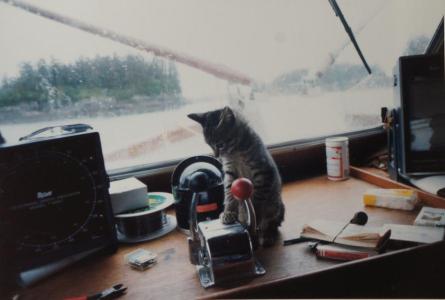